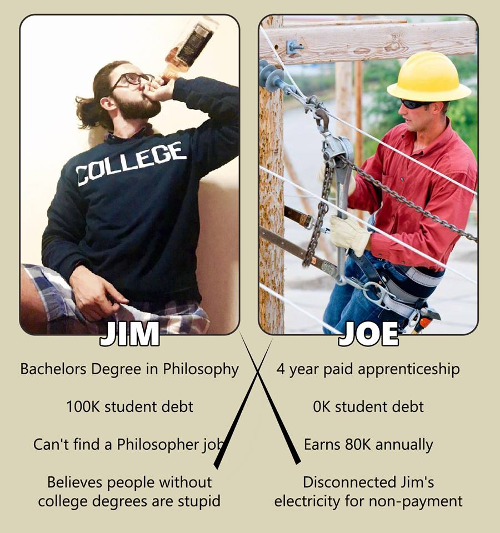 I am overeducated. I hold two bachelor’s degrees, a master’s degree, and am working on another. I’ve spent more time in school than not, and it’s going to be a long time before that’s not true anymore. I am the guy on the left in this meme. One of my bachelor’s degrees is even in philosophy. In fact, every single tick mark on that list is true about me, except the last one. And that is what we we need to talk about.

There are three dimensions that need to be addressed here.

Work in the Trades!

This talking point is one that I have a difficult time engaging with or formulating a coherent response to. I see it on social media all the time, and it goes something like this: getting a four-year-degree is bad, working in trades is good. There are a number of different formulations of this meme, but they all boil down to steering people away from university and a four-year education. The snivelling, college-educated, elitist is poor, burdened with tremendous debt, and cannot find a job with his bachelor of arts in philosophy, but the hale, hearty electrician, lineman, or heavy-equipment operator is the exemplar of virtue and American grit.

The problem I have is this: the meme is just correct enough to be difficult to detangle truth from fiction. Of course, people should work in the trades. Of course, people should not feel inferior if they did not attend university or hold degree or even a diploma. But the meme is exactly what it pretends it’s against: it belittles someone’s chosen path in life. And it does it smugly. It builds this straw man caricature that people want to believe about college. Of course, the guy on the left is the worst. But he’s also a fiction in all the ways that matter.

The meme is the product of a long-term, systematic, crowd-sourced–and mostly successful–effort to discredit and devalue, not just a college education, but people with college educations. Specifically the humanities. It’s an underhanded attempt to undermine one of the foundations of democracy: education. And the ploy is particularly nefarious because it’s specifically designed to appear to be an appeal to logos, but it’s pure pathos. It’s an emotional appeal cloaked in “common-sense.” And common sense is just another buzz word designed to discredit education.

People with degrees are entitled. They have an inflated sense of self worth. They are not as smart as they think they are. They are just lazy layabouts who want to spend the government’s dime. And they dare condescend to our boys in the trades! Except that they don’t do that. No one does that. I have a peer group that includes the entire spectrum of educational attainment and economic status, and have never witnessed these kinds of behaviors among my peers. Perhaps my availability heuristic is flawed. And it is fairly well-known that there is elitism in the ivy league. But remember: the ivy league are also the wealthy and those people suck anyway for completely different reasons. So I do not think that the guy who majored in philosophy at state school feels at all superior to anyone who chose to become an electrician. Because that person majored in philosophy. And knows that would be a dick thing to do.

The Good Will Hunting Effect

I hate that movie. It’s super dumb. And it’s because this quote is bullshit. You cannot get the same education by reading library books. Nothing could be further from the truth. The benefit of having a mentor (because that’s what a professor is) is incalculable. And furthermore, the quote mentions the price of an education. And it comes so close to making the right point and then misses it completely because: the price of an edcuation is part of the disease affecting American society. The fact that we are not actively working to create the most educated population in the history of the world (which we could totally do), means that there are forces actively working to prevent it from happening.

A philosophy degree is useless? Perhaps on a resume–though I don’t buy this since mine has gotten me several jobs, including my current one. But the degree represents a concerted effort to foster and cultivate critical thinking skills. A humanities degree helps build a cross-discipline, infinitely useful skill: the ability to spot bullshit. And this meme is bullshit. Because it’s specifically designed by and for people who would be the unwitting tools of an establishment (political and economic) which benefits immensely from people remaining uneducated and gullible.

By all means, go work in the trades because the trades are great. It’s satisfying work and it can be very rewarding (oh, I’m also a carpenter, I should mention). But you should also go to college if you want. And you should major in the humanities if you want. You may not be able to find a job “in your field”, but you have something better. A wide skill set, an ability to think, and if you sell (ha!) yourself correctly, you can find lucrative and rewarding work in just about any industry. Don’t let anyone define you except you. And don’t worry about the debt either! Once super inflation takes over, it won’t be worth anything anyway!